What to do with those war letters

Several years ago during a visit to my husband’s family in Tennessee, his mother showed me a stash of letters her father had written home while he was in WWII naval service. 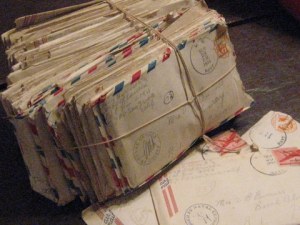 The fragile, faded letters were tied in bundles using white string and had been found among Granny’s possessions when she died long ago. No one had really looked at them, and probably no one ever would. No one knew what to do with them, but no one wanted to throw them out either. I got permission to take them home with me to study the best way to save them and make them interesting.

Fortunately, the letters were all in order by date. I created section titles: The Journey Begins (for training), Riding the Waves (first deployment), Holding in San Pedro (return to U.S.), Back at Sea (deployment again). The letters end abruptly several months after the War was over, as Pawpaw landed back in Oregon and awaited release home, so I ended the book with my mother-in-law’s memory of her daddy’s return to his family’s waiting arms.

I did not include all the letters. Instead, I used only the interesting clips from interesting letters interspersed with pertinent details, many I had to research. Perhaps surprising to us at home, military duty is not all excitement and danger. Depending on branch of service and location of service, days can be pretty boring and spent doing menial chores, waiting for mail call (the big event of the day), playing cards, hoping the movie that night is a good one. Edit, edit, edit. We saw some of this from Bruce Brodowski’s book last week – and we saw that even in the throes of battle, we may not hear a word of it in the letters because of censors or because the men (or women) didn’t want to worry their families at home. This is one reason why you may need to include some bits of what was going on in the war at the time of the letters.

How would I show the edited text? I used ellipses (…) to show where words or sentences

were left out, although I had to be careful to capture the full meaning of the remaining text used. I used [redacted] to indicate where censors had clipped. I also chose to fix some basic punctuation so that readers could easily understand the writing. I used (sic) to indicate where I left important words misspelled (ex., …one of the yowmans (sic)…). I left as much as possible of the chosen text unchanged to capture the essence of Pawpaw’s personality and his writing style and skill. After all, he was a young, southern farmer from way out in the country, so I wanted that to shine through. And I certainly did not edit for political correctness. 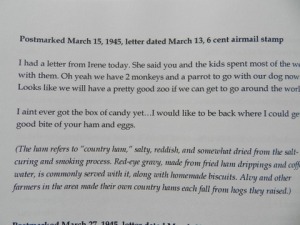 (text seems to be “swimming” because it’s hard to photograph pages out of a book!)

I included an introduction to give the front end of the story—who was this man, when was he drafted, what did he leave behind. I gave an overall summary of what I found in the letters, including that he was a devoted family man who wrote home almost daily and who desperately missed his wife and babies. It ends with the statement, “Following are sections taken from Alvy’s letters, unchanged for the most part, with some punctuation added for understanding.  Spelling is generally left as written.” On the inside cover page of the book I included, “Edited by Linda Austin.”

When putting a book of letters together, I’d suggest adding a lot of photos to make things more interesting. I was able to include scans of a ship newsletter, a ship menu, a celebratory newspaper clipping, postcards, money from Korea. Be sure to scan some of the actual letters so readers can see the handwriting. I scanned some of the canceled postage stamps, too. At the beginning and end of the book are family photos with PawPaw in his naval uniform.

The book I created is for family only, easily done (see post on using Lulu.com.) If you intend to publish war letters for the public, you will need to find the big story in them and write that yourself, incorporating bits of war history and bits of the letters that go along with that over-arching story. Last week’s post with Bruce Brodowski shows how he did this in The Dad I Never Knew, although letters play the major part of his book. Inman’s War, by Jeffrey S. Copeland, also uses letters to tell a love story. Hope those of you with a bunch of old letters are inspired! 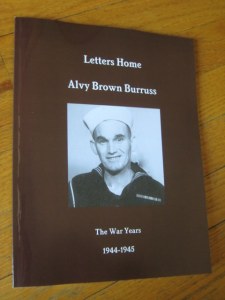 Co-author of Cherry Blossoms in Twilight, a WWII Japan memoir of her mother's childhood; author of Poems That Come to Mind, for caregivers of dementia patients; Co-author/Editor of Battlefield Doc, a medic's memoir of combat duty during the Korean War; life writing enthusiast; loves history and culture (especially Japan), poetry, and cats
View all posts by moonbridgebooks →
This entry was posted in letters, war stories, WWII. Bookmark the permalink.

13 Responses to What to do with those war letters