Memoir: Your Journey, an Inheritance

Posted on February 10, 2019 by moonbridgebooks

Now what? Last week I attended our county library’s author event with Dani Shapiro, whose latest book is Inheritance: A memoir of genealogy, paternity, and love. The room was packed, all to hear her fascinating story of shocking discovery through DNA testing, and how that affected her concept of who she was. Dani is a blonde, raised by dark-haired Jewish parents and steeped in Jewish traditions. Yes, now what?

Dani Shapiro’s story is a whole ‘nother perspective from that of adoptees who feel a deep need to find their biological parents, to help them make sense of themselves by where they came from and what happened (and to know their medical histories). What if your father was a sperm donor, as Dani discovered hers was? (No one has mentioned the issue of egg donors yet.) These donors were promised anonymity, as were parents who gave their children up for adoption, but for them there likely will never be an “opt in” box to check if they want to know who they fathered. And now there is that DNA testing by Ancestry.com, 23andMe, and other companies that will reveal the unknown, and secrets that possibly may ruin lives if told.

What if you discover, like a Chicago woman in the news today, that you have 15 half siblings thanks to your sperm donor father? Do you expect to have relationships with relatives whose only connection is having a father who did not want to know about them? Maybe they don’t even know and you will shock them. With DNA testing, even if you did not submit a test yourself, you can be found, like it or not, if any of your relatives have done the testing. Crime labs are using these genetic databases to solve murders sometimes decades old (recently, Myoung Hwa Cho and son Robert Whitt). Dani found her biological father within 36 hours, with some help from social media, too.

Dani’s memoir promises to be a fascinating one. She already was a memoir writer, and suddenly she had a really good reason to write another. Despite all her memoirs, Dani said she doesn’t have a good memory! But, some experiences she remembers with sharp clarity, like when her mother casually mentioning to a stranger that Dani was conceived in a Philadelphia institute. Dani had her life narrative crushed, and she had to analyze it and make adjustments. Her advice to other memoir writers: 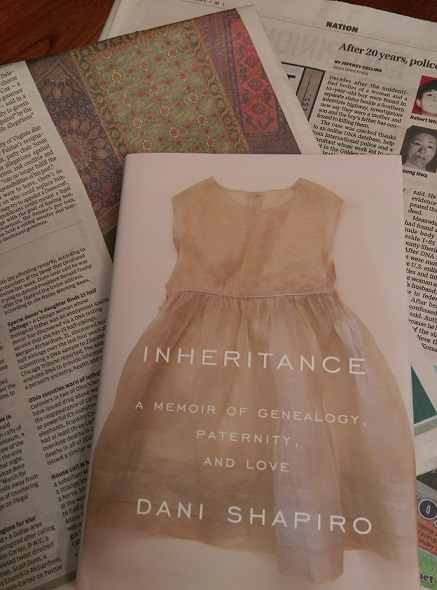 Co-author of Cherry Blossoms in Twilight, a WWII Japan memoir of her mother's childhood; author of Poems That Come to Mind, for caregivers of dementia patients; Co-author/Editor of Battlefield Doc, a medic's memoir of combat duty during the Korean War; life writing enthusiast; loves history and culture (especially Japan), poetry, and cats
View all posts by moonbridgebooks →
This entry was posted in adoption, book talk, heritage, memoir writing and tagged book talk, culture and heritage, writing. Bookmark the permalink.

6 Responses to Memoir: Your Journey, an Inheritance