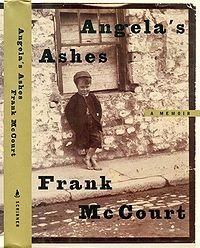 Frank McCourt has died but leaves a legacy in memoir with Angela’s Ashes, the story of his hardscrabble Irish upbringing. While he has been called the inventor of the “misery memoir,” and indeed his debut work has been followed by many other sob stories of abuse and disorder that seem to compete with one other for the worst of the worst, according to McCourt, “one of the good things about a memoir is looking for something bigger than yourself, you know; something important in your life, rather than just the life itself.” Such is what can make a memoir a cut above the others. A memoir should not be just a rehashing of tears, a perpetual whining, an unremittant complaining, but a look beyond to lessons learned, an enlightenment, a healing, a historical perspective.

McCourt has been accused of exaggerating too much, of making up conversations he couldn’t possibly have remembered as a small boy, but McCourt has an important comment about that, too, in his 2001 interview with Spiked magazine:

“A memoir is an impression of your life, and that gives you a certain amount of leeway. If an autobiography is like a photograph, then a memoir is more like a painting. So I’ve always said to my critics, This is my impression of my life, so what are you gonna do about it?’

McCourt states that memoir is the twin sister to fiction. There is a fine line between memoir and fiction, though, and while both aim to tell a good story the fiction line is crossed when you enter the realm of pure fabrication. Memoir writers are similar to artists who are free to take “artistic license” to re-create a real life snapshot. They add or subtract, alter colors and perspective. Memoir writers can do the same, but obviously in lesser degree to capture our own reality without outright lying or distortion of factual history. Isn’t that a nice thought – we are the Monet’s of the writing world!

Co-author of Cherry Blossoms in Twilight, a WWII Japan memoir of her mother's childhood; author of Poems That Come to Mind, for caregivers of dementia patients; Co-author/Editor of Battlefield Doc, a medic's memoir of combat duty during the Korean War; life writing enthusiast; loves history and culture (especially Japan), poetry, and cats
View all posts by moonbridgebooks →
This entry was posted in capturing memories. Bookmark the permalink.
%d bloggers like this: