My dad got an early Father’s Day present last weekend. My daughter and I had to return her rental car far into Chicago and Daddy kindly agreed to give us a ride back. Since we would be near where Daddy grew up, I suggested we take a side trip to see his old haunts. My stepmom and her sister came along so we had a merry carload on the way back. 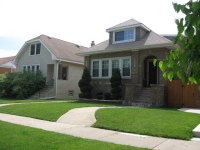 With Daddy pointing the way and my stepmom driving, we came upon his rebuilt elementary school no longer surrounded by tall grassy fields. Three houses stood where my grandmother’s tall old brown house had been, the giant horse chestnut trees only shady memories. It was now an unrecognizable place that meant nothing to me, but on the next street over we were delighted to find the little brick house my father was born in. Somehow he had neglected to ever show that to us! Farther on we discovered Daddy’s high school and the beautiful brick facade of his college’s Old Main. He pointed to the window of his English class room.

It was fun to see Daddy excited, telling stories of walking over the frozen river in winter to get to school, sweeping his arm across now imaginary hay fields that also held their cows and pigs and vegetable plots. He pointed out where old garages had burned down due to the combustible stills inside that gangsters ran during the Prohibition. Finally, he led us to a corner of a cemetery and showed us his parents’ grave marker–a burnt copper rectangle barely holding its own against encroaching grass. It was the first time I had ever seen it.

I took lots of pictures. We made Daddy get in some of them. I was enthralled, not just by the history, but by the transformation in my father. I believe Daddy felt half a century younger. All those years we visited Grandma almost every weekend yet never knew the secrets of the area. Daddy may have gotten a present that day, but so did the rest of us.

Co-author of Cherry Blossoms in Twilight, a WWII Japan memoir of her mother's childhood; author of Poems That Come to Mind, for caregivers of dementia patients; Co-author/Editor of Battlefield Doc, a medic's memoir of combat duty during the Korean War; life writing enthusiast; loves history and culture (especially Japan), poetry, and cats
View all posts by moonbridgebooks →
This entry was posted in memories. Bookmark the permalink.
%d bloggers like this: