Are you afraid to write your memoir? It’s scary out there!

Posted on August 19, 2012 by moonbridgebooks

Last week I talked about the ferocious world of extremist views out there lately and how people are getting very emotional, jumping to conclusions and verbally attacking each other. Might make you a little afraid to write your memoir. What if you say the “wrong” thing and your family thinks you are an ignoramus worth forgetting?

For one thing, you probably won’t be writing many extremist views in your memoir because a memoir is not a bunch of political or philosophical essays. That would be like writing your own version of The Federalist Papers or Plato’s Republic. Fine, but not a memoir.

A memoir is a written record of a period of your life and what you thought about it. It’s okay to have opinions unpopular with your family. The point is not the opinions but the story behind those opinions. What makes you think that way? Opinions generally flow out of the stories you tell; it’s more rare to tell stories just to talk about an opinion.

My husband’s side of our family is from the South. His grandparents lived in a time of prejudice against black people. It was The Way of Thinking.  They were nice to black people yet seemed to think of them as large children, even though they were experts at butchering hogs. They had been brought up to think of their black friends and farm helpers a certain way, and their black friends were probably brought up to think that’s just the way these white people were. I did not try to teach my husband’s elders a lesson with my pointer finger, nor did I disown or belittle them. If they had actually mistreated someone, I know I’d feel differently.

Do we whitewash politically incorrect views out of our stories, out of our history? Will we disown our family members who think differently than we do? Not usually. They are family, and we usually love them enough not to disown them over mere opinions. Usually we put up with really bad behavior, too!

Our opinions and behaviors are a part of who we are and usually a result of the social culture and history of the time. In times of sociocultural transition, big differences of opinion are common. When there are polar opposites in the family, it’s best to agree to disagree and avoid discussion. On my own side of the family, I’m not sure we can talk about anything important when we’re all together!

The best part of memoir is that it is the written word, so nobody’s going to stop you in the middle and have a verbal argument about your political or religious beliefs or why you shouldn’t be a vegetarian.  I don’t believe in removing traditional Christian thoughts or leaving out the part where you were excited to vote for Barack Obama. Do you delete the paragraph explaining you think NASA faked the Apollo moon landings? Why bother; it makes you look colorful. It’s not the opinion that matters, it’s the story behind it, what we can learn from it, and how we can appreciate you as a three-dimensional person. We do not need to accept all of a person’s opinions before we can love them or learn from them. Most people understand this.

Here’s a related post on listening and learning and accepting:  Statements or Questions, by my online buddy, Earl. B. Russell. 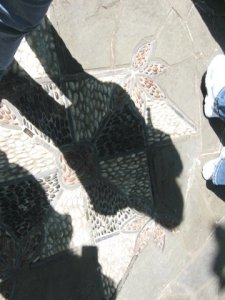 Be more than a shadow

Co-author of Cherry Blossoms in Twilight, a WWII Japan memoir of her mother's childhood; author of Poems That Come to Mind, for caregivers of dementia patients; Co-author/Editor of Battlefield Doc, a medic's memoir of combat duty during the Korean War; life writing enthusiast; loves history and culture (especially Japan), poetry, and cats
View all posts by moonbridgebooks →
This entry was posted in history, memoir writing and tagged lifewriting. Bookmark the permalink.

7 Responses to Are you afraid to write your memoir? It’s scary out there!