Stan “The Man” Musial and life stories of everyday legends

Posted on January 21, 2013 by moonbridgebooks

Even I, a transplant to St. Louis and not much of a sports fan, knew who Stan “The Man” Musial was and what he represented. Cardinal Nation and many others mourn his passing on Sunday. As sportwriter Bernie Miklasz said in today’s St. Louis Post Dispatch, “…his death is a loss for civility, sportsmanship and character.”

The St. Louis Post Dispatch put together a beautiful special section in Sunday’s paper as a tribute to Stan. I learned how Stan’s father, a Polish immigrant, had to be persuaded to allow his firstborn son to join a Cardinals affiliate league instead of going to college. Stan’s mother, a daughter of Czechoslovakian immigrants, also wanted her son to attend college and escape the Pittsburgh steel mills and mines, but saw how much he yearned to play ball. The story goes that Mary, arm around her crying son, told her husband, “In America, a boy is free NOT to go to college if he doesn’t want to.”

There are plenty of books about Stan that tell his stories—he was a legend, after all. Since I don’t care much about sports, for me his biggest legacy was as a kind man unaffected by fame, a family man who loved his wife for 71 years, the son of struggling immigrants who escaped a life in the mines. I think even if Stan hadn’t been famous, he would have had a good story.

In one of the online groups I follow, a woman posted what her grand-nephew had written about his father as a tribute marking what would have been his 46th birthday. This young Marine said he was glad he had had almost twenty years with his dad and that his dad knew he loved him. But, he wished he knew his dad’s stories, his history. “I know who you left us as, but what I long for the most is to know the path you traveled to become the man, the myth, the legend, and most important, the father I knew you as.”

Everyday legends are important, too. 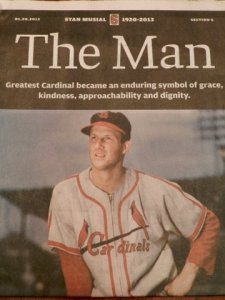 Latest news: for anyone wanting a copy of the St. Louis Post Dispatch Stan Musial special section, you can buy one. Not sure how long the offer will last.

Co-author of Cherry Blossoms in Twilight, a WWII Japan memoir of her mother's childhood; author of Poems That Come to Mind, for caregivers of dementia patients; Co-author/Editor of Battlefield Doc, a medic's memoir of combat duty during the Korean War; life writing enthusiast; loves history and culture (especially Japan), poetry, and cats
View all posts by moonbridgebooks →
This entry was posted in capturing memories. Bookmark the permalink.