No memoir? More on writing truth as historical fiction 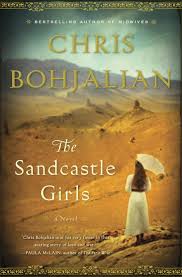 Last week I heard Chris Bohjalian talk about Sandcastle Girls, his novel about the Armenian genocide. A year after its release, the paperback version is out, and Mr. Bohjalian is still very excited, very passionate, about the most important book he has ever written. That’s saying something because he has a number of bestsellers to be proud of. Sandcastle Girls brings to light the murder of 1.5 million Armenians in “the slaughter you know nothing about.” During WWI, the world did know and complained without taking any real action. The Ottoman Empire conducted a “crackdown on opposition” and a “deportation” of men, women and children in ways more abominable than what was done to the Jews, if we can even imagine that. Then the killings were forgotten, history swept under a Turkish rug. Chris Bohjalian and the Armenian diaspora want us to remember, to join their story to the Jewish one saying, “Never forget, never again!”

Bohjalian, half Armenian, heard a lot of stories from his grandparents, but they were reticent about saying much about the time of killings. Except for a few instances when strange words popped out. Bohjalian’s aunt was talking about the business plan of her new yogurt smoothie shop (yogurt is tang in Armenian, and Armenian immigrants introduced yogurt to the U.S.). His grandmother said, “Tang … oh, that’s how the older girls were killed, they gave them poisoned tang to drink.” When pressed, she said, “That’s so long ago, nothing more to say.”

So Bohjalian did not have a memoir to ghostwrite for his grandparents. Instead he wrote a draft of a novel full of historical information about the genocide. He said it was terrible—boring, amateur. For his second try, “I knew I’d need a personal hook” to get readers interested. He created a female character that was like himself, not knowing her family history but curious as she became an adult, learning about unspeakable horrors. In this way he could unfold the whole story of the genocide. He incorporated a few family stories he did have (that was him dressed in red velvet knickers and forced to sing “I’m Henry the VIII, I am” in a bad British accent), but most of the book is fiction mixed with history. 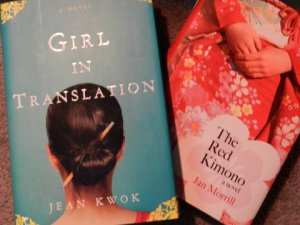 transform their own real stories into a more compelling picture of the truth. Jean Kwok wrote Girl in Translation incorporating much of her own immigration horror story, and Jan Morrill’s The Red Kimono grew out of her mother’s family experience in Japanese-American internment camps and from her grandfather’s murder. Jan’s mother still cries and cannot speak of her camp experiences or of her father’s death, so Jan had few real stories to work with. Writers might enjoy Doll in the Red Kimono, a book of Jan’s blog posts examining issues of writing fiction inspired by mere whispers of family experiences.

The Armenian Weekly wrote a review of Sandcastle Girls:

“While there are rich personal stories that his readers connect to, what he has achieved is much larger. Bohjalian has written a compelling and powerful novel that will bring the history of the genocide to a wide audience.”

I learned a lot from Mr. Bohjalian’s magnetic talk and went home to research this nightmare in history on my own. George Santayana said, “Those who cannot remember the past are condemned to repeat it.” We have to keep teaching the past.

Co-author of Cherry Blossoms in Twilight, a WWII Japan memoir of her mother's childhood; author of Poems That Come to Mind, for caregivers of dementia patients; Co-author/Editor of Battlefield Doc, a medic's memoir of combat duty during the Korean War; life writing enthusiast; loves history and culture (especially Japan), poetry, and cats
View all posts by moonbridgebooks →
This entry was posted in book talk, capturing memories, history, multicultural, writing and tagged book talk, writing. Bookmark the permalink.

4 Responses to No memoir? More on writing truth as historical fiction