Posted on June 5, 2014 by moonbridgebooks

John McManus commanded a jam-packed room at the local library the other night, talking about the D-Day battle of Omaha Beach and specifically about the infamous 1st Infantry Division known as The Big Red One. McManus is a university professor and a well-respected military historian who has written eleven books (so far) that combine war history with commentary and soldiers’ accounts. The Dead and Those About to Die, about D-Day, is his latest. 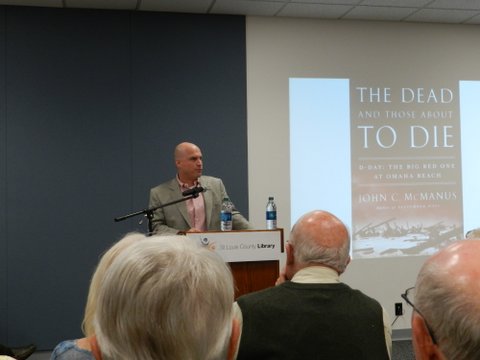 The guy does a lot of research and knows his stuff, no need to look at notes. What could have been a dull, technical talk of numbers and strategy was a fast-paced, insightful and colorful blow-by-blow peppered with first-hand account stories and quotes from veterans. He said the movie Saving Private Ryan was a pretty good depiction of D-Day horrors except the bodies were probably more scattered than stacked, and the logs on the beach are pointed the wrong way. The few amphibious tanks that didn’t drown in the rough waves had a difficult time trying to move around all the dead bodies.

McManus has read a lot of first-hand stories of veterans as part of his research. He likes to get the soldiers’ thoughts and perspectives. One day a Frenchman contacted him saying he tended a certain soldier’s grave in the Normandy American Cemetery. Many local citizens have adopted graves in the American military cemeteries overseas. McManus was able to tell the Frenchman a little about the soldier whose grave he cared for and how he had died. Another time he received a letter from the mother of a soldier who died in action, telling what she knew about her son during the war. She ended by saying that was her only son and that she hoped his story would be important and remembered. Such things inspire McManus to include so many personal comments and stories in his books. He even includes comments by enemy soldiers in The Dead and Those About to Die.

Some notes from John McManus:

-On D-Day, the German general Erwin Rommel was away celebrating his wife’s birthday
-US troops were loaded down with 60-80lbs of gear so some men drowned
-Transport of wounded out was not considered; the focus was on unloading troops
-The Germans were greatly outnumbered, but held the high ground in strong bunkers
-The French Resistance gave the Allies intelligence on the Germans
-One of the German concrete bunkers was turned into a house the owner rents out

John McManus chatting with an Iraq combat veteran and his son

Standing next to me in line waiting for autographs was a man who helps organize honor flights to Washington, D.C. for WWII veterans. He enjoys hearing the stories that spill from them as they wait to board the planes. He explained about the honors and festivities they receive in D.C. and in the airports and how pleased and touched the veterans are that their service and sacrifices have been acknowledged so.

During the Q & A part of the author program, an audience member asked any WWII veterans there to please stand. Six men rose to applause. 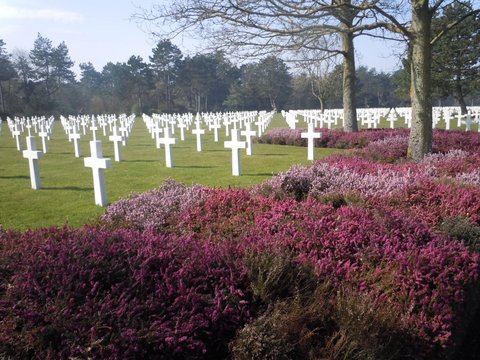