Ornament Memories of Christmas Past

Posted on December 17, 2018 by moonbridgebooks

I put up a small artificial tree this year. The kids are grown and I’m busy. The thought of putting up a big live tree of dripping needles was too much, but the short old fake tree is a little embarrassing, at least until dark when the colored lights bring on the magic. I did put out the usual decorations on the fireplace mantel. The fireplace we never use because it burns wood, which aggravates my allergies. But, my homemade stockings look nice hanging there.

It’s really a shame when I put up the little tree because I have a big collection of ornaments—ornaments I can’t bear to get rid of because they hold meanings. Some of my favorites are from when we lived in England – cloth dolls of King Henry and some of his wives, a red-coated Queen’s guard, Alice in Wonderland. I fell in total love with England—and Wales—and could never part with those ornaments. Then there are the

ones from my family that were given to me during the early years of my marriage. I have the dates written on some of them. I love having those dates! There’s a hand-decorated, wine-colored glass ball from 1984, with little silk roses glued on top, crafted by my stepmom. A jointed cloth bear and a horse were sewn by my sister. Also, I still have some ornaments the kids made in kindergarten.

This year I opened a box I had not looked at for years (because I have so many ornaments) and found an angel from my childhood days. Not much survived from then, but here was that angel I had forgotten about. And some fiberglass birds that clip onto the tree branches. I have the four “Heavenly Noel Angels” made in Japan in the 1950s. These are my treasures, reminding me of childhood excitement and the days when we drove to my grandmother’s house in Chicago, me thrilled by all the lighted decorations attached to streetlights. They are all vintage now—like me. 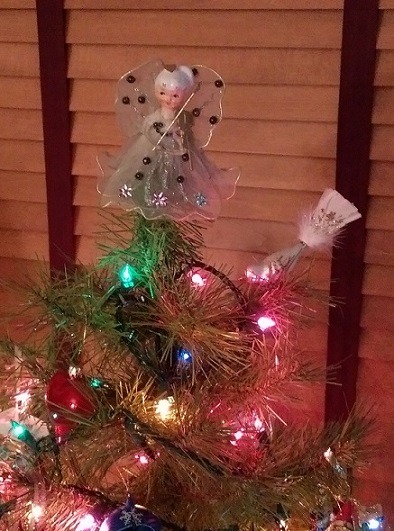 I also love my floppy Rodney and Rhonda Reindeer from the mid-1980s. Their children are Randy and Ramona, and there’s a mini baby version. These Hallmark toys apparently were sold by Burger King, with the mini baby in kids’ meals, although I swear I got them from McDonald’s because I normally would not go to BK. Memories can be deceiving. These toys take me back to living in northern Alabama. I had the beany baby craze pre-children, and a decade before those other beany babies came out.

I have not read Marie Kondo’s The Life Changing Magic of Tidying Up, which was so popular a while back, but I know it’s about keeping only the things that speak to you. Well, my house is noisy. Noisy with memories.

Merry Christmas – hope you have great memories hanging on your tree!

Co-author of Cherry Blossoms in Twilight, a WWII Japan memoir of her mother's childhood; author of Poems That Come to Mind, for caregivers of dementia patients; Co-author/Editor of Battlefield Doc, a medic's memoir of combat duty during the Korean War; life writing enthusiast; loves history and culture (especially Japan), poetry, and cats
View all posts by moonbridgebooks →
This entry was posted in holiday, memories and tagged Christmas. Bookmark the permalink.

1 Response to Ornament Memories of Christmas Past