The Postmistress and memoir writing

Posted on February 28, 2011 by moonbridgebooks

http://rcm.amazon.com/e/cm?t=cherrybloss03-20&o=1&p=8&l=bpl&asins=0425238695&fc1=000000&IS2=1&lt1=_blank&m=amazon&lc1=0000FF&bc1=000000&bg1=FFFFFF&f=ifrA few days ago, I went to see Sarah Blake, author of the bestselling book The Postmistress, at one of our local independent bookstores. I had just started reading this book about WWII on the European front and at home in small-town America, and was quite engrossed already. Sarah explained how her book somehow put itself together over the ten years she wrote it, no plan in mind to start. Then she read a chapter about the woman war correspondent, Frankie, who works with Edward R. Murrow, finding herself one moment at a bar dancing with a stranger and the next emerging from a bomb shelter with a newly orphaned boy. So poignant, her words taking their time uncovering intimate details of the scene yet insistent with trepidation and anxious waiting. The audience seemed to hang onto her words, breathing in their meaning until the silent end. And to think it all started with Sarah wondering if the postmistress of her tiny New England town ever read other people’s postcards on the sly, and if she did, did she whisper the details to others or keep them to herself. 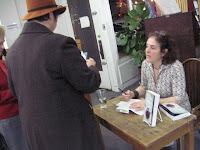 In an interview with NPR, Sarah spoke of Edward R. Murrow’s power—his “ability to bring home the war in tiny details, to give the human side, but stay neutral.” He simply told stories of the voices from the street—the real stories of what was happening in faraway London during the Blitz. And I thought of my ghostwriting, which is telling the stories of everyday people, but staying neutral to let their voices and opinions come through without my own lens distorting to reflect what I think. In The Postmistress, reporter Frankie has a difficult time being neutral, until she finally loses her voice from the madness of not telling everything she knows and feels. (Not a spoiler: this is not the end of the book.)

Edward R. Murrow changed the way news was reported. By bringing home those little bits of real people stories to the Americans back home, he was able to give them something personal to relate to. Not the big picture of horror that was too large to grasp without seeing, but the intimate stories that burn in people’s hearts. And so it is with lifewriting and memoir—taking history and making it small and real to strike the hearts of those who hear. Murrow’s reporting technique also let the American people understand the gravity of the war they would soon join at a time when news was censored to avoid panic, but that’s a different story.

Co-author of Cherry Blossoms in Twilight, a WWII Japan memoir of her mother's childhood; author of Poems That Come to Mind, for caregivers of dementia patients; Co-author/Editor of Battlefield Doc, a medic's memoir of combat duty during the Korean War; life writing enthusiast; loves history and culture (especially Japan), poetry, and cats
View all posts by moonbridgebooks →
This entry was posted in book talk, history. Bookmark the permalink.

3 Responses to The Postmistress and memoir writing