During the Kanto earthquake of 1923, my Japanese grandmother rushed to the bamboo forest with her babies, thinking the fibrous mass of roots would keep the earth from cracking open. I doubt if that would stop the giant shifting of the earth, but she did survive to tell the story to my mother, who was born two years later. I know my relatives are safe, being west of Tokyo, however I can’t speak Japanese so I’ve arranged for a friend to call them, mostly to let them know we are thinking of them. 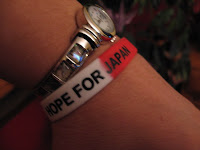 We are doing what we can for Japan. I’m involved in local Japan-America groups and we’re all brainstorming fundraisers. Many university student groups are selling rubber bracelets, while others are putting together dinner events or creating graphic arts items to sell. A group I am a member of is providing bracelets to local schools so the kids can have their own fundraisers, and we are donating to our Japan America Society St. Louis earthquake fund. Students from one university immediately created handmade cards to encourage the Japanese people. Wells Fargo and Novis International are coming through with large donations. Wasabi Sushi in the St. Louis area and in Colorado is donating all March 30th dinner meal proceeds.

President Obama told Prime Minister Naoto Kan that the United States was ready to send assistance. He said, “You know, I’m heartbroken by this tragedy. I think, when you see what’s happening in Japan, you are reminded that, for all our differences in culture or language or religion, that ultimately, humanity is — is one.”

Obama spoke the message of the book I wrote with my mother. I am offering proceeds from sales of my mother’s story, Cherry Blossoms in Twilight, about her life around WWII in Japan, to Save the Children’s Japan aid fund. Orders must be received via the PayPal button on the Moonbridge Books website. This story also shows the humanity of all peoples, even those we think of as the enemy. After WWII, the U.S. became the friend of the Japanese people, helping them rebuild after disaster just as the U.S. offers to do again after a different kind of disaster.

It is so heartwarming to hear the encouragement of the world yet again as yet another horrifying disaster unfolds. For all our arguing and fighting, for all our differences in opinion, underneath we all laugh and cry the same. But it is when we cry that our eyes really open to our love for each other as brothers and sisters in this life together. Earthquake-tsunami stories will not be pleasant, but the memories of help from strangers will be treasures.

Co-author of Cherry Blossoms in Twilight, a WWII Japan memoir of her mother's childhood; author of Poems That Come to Mind, for caregivers of dementia patients; Co-author/Editor of Battlefield Doc, a medic's memoir of combat duty during the Korean War; life writing enthusiast; loves history and culture (especially Japan), poetry, and cats
View all posts by moonbridgebooks →
This entry was posted in Uncategorized. Bookmark the permalink.
%d bloggers like this: