Posted on January 8, 2012 by moonbridgebooks

My mother was unable to eat dinner tonight. She has Alzheimer’s so it can be difficult to communicate and determine exactly what’s going on with her and when it started. Usually she doesn’t even know to tell anyone when she is cold and needs a shawl, but tonight she obviously had an upset stomach. She was put to bed early, with the hope she will feel better tomorrow. I went home and downloaded Margaret Ann Brown’s new Kindle e-book, Alzheimer Effects, a Caregiver’s Perspective. I don’t have a Kindle, but downloaded the Kindle app to my laptop and got the pdf e-book version. The Kindle app basically gives you a Kindle! Well, almost. 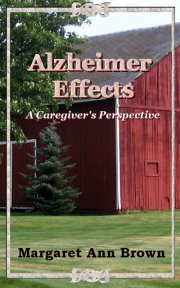 Alzheimer’s. While not a memoir, Alzheimer Effects is a type of lifewriting, giving short synopses of personal experiences caring for clients. Each little section on a client is followed by Margaret’s thoughts in prose-poetry form. At the very end is a list of suggestions that might help an Alzheimer patient remain in their home longer. I, myself, have tried most of them on my mother before having to take her to a nursing home to be watched around the clock.

Alzheimer’s is a very frustrating and confusing disease with varying symptoms and expressions that can change in a day. It took a class given by the Alzheimer’s Association for me to understand what in the world was going on with my mom. Even the experts cannot tell you much about the course of the disease because symptoms and stages are different with each person. Margaret felt a passion to write this short booklet to help others see what happens not just in one case, but several.

Alzheimer’s Effects is not a field guide to Alzheimer’s, rather a miniature window to understanding for those just beginning that journey. It is written in a homey style and with love. Anger, frustration and guilt can be alleviated a bit by knowledge, and Margaret provides us with a glimpse of what the future holds. Not pretty, but necessary.

Alzheimer Effects is downloadable for free until January 12.

Co-author of Cherry Blossoms in Twilight, a WWII Japan memoir of her mother's childhood; author of Poems That Come to Mind, for caregivers of dementia patients; Co-author/Editor of Battlefield Doc, a medic's memoir of combat duty during the Korean War; life writing enthusiast; loves history and culture (especially Japan), poetry, and cats
View all posts by moonbridgebooks →
This entry was posted in aging, book reviews. Bookmark the permalink.