Yay, I just won a book, and not just any book. Amused by Books reviewed The Gods of Heavenly Punishment, a multi-faceted novel that covers WWII experiences in Japan on different fronts, including the civilian story of Yoshi and her parents. Of course I had to throw my name in the hat for this giveaway. The author, Jennifer Cody Epstein, has an impressive background with a BA in Asian Studies and MFA from Columbia. She taught at Doshisha University, Tokyo, and has written for international publications. For those who don’t know yet, book giveaways can be found on book blogger sites as well as on Goodreads. Jennifer Cody Epstein is on a blog tour and has more stops yet for those wanting to try for a free copy of her book.

Researching about The Gods of Heavenly Punishment, I found reviewer comments saying books about the Japanese civilian WWII experience were rare, “a side of war that is often forgotten.” I’d say it’s almost completely unknown outside of Japan, and that’s why I published Cherry Blossoms in Twilight. At the time, the only other narrative book covering this was a long novel based on a true story, “A Boy Called H,” an excellent read. Sadly, it looks like it’s now out of print, along with The Girl With the White Flag, a poignant story of a child’s survival of the battle of Okinawa.

Shig: The True Story of an American Kamikaze came out in 2009. It is the memoir of a Japanese-American man caught in Japan during WWII. Shigeo joined the Japanese military, so there’s pre- and post-WWII story, but little wartime civilian detail. His military training is certainly interesting, though. Gail Tsukiyama’s The Street of a Thousand Blossoms (2008) is a novel covering the Japanese civilian experience during WWII. It is a worthy read that teaches about sumo and Noh. That’s it for the narrative stories I know of about life in WWII Japan.

Sometimes I think of turning Cherry Blossoms into a novel. More people would read it, I think. Shig has been turned into a novel, yet to be published. There is value in having true stories, though. Those are real history worth saving. Novels don’t get into university research libraries as Cherry Blossoms has. Cherry Blossoms may be a small, simple story, but I like that it is honest and real. History is mostly made up of regular people going about the small drama of their daily lives. Some of us are curious about those lives. I’ll let novels like The Gods of Heavenly Punishment provide the big drama – I can’t wait to read it, and to compare it to the true stories I know. 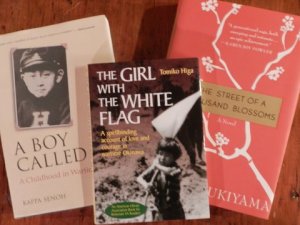 Co-author of Cherry Blossoms in Twilight, a WWII Japan memoir of her mother's childhood; author of Poems That Come to Mind, for caregivers of dementia patients; Co-author/Editor of Battlefield Doc, a medic's memoir of combat duty during the Korean War; life writing enthusiast; loves history and culture (especially Japan), poetry, and cats
View all posts by moonbridgebooks →
This entry was posted in book talk, Cherry Blossoms in Twilight, multicultural, war stories, WWII and tagged book talk, culture and heritage, war stories. Bookmark the permalink.